The Shadows of a Stranger journey has been long and eventful from initial conception to its official release. An independent production based in Lincolnshire, the filmmakers set out to make a film with a grand scale working on a tiny budget. The way to do this was to build their own ‘digital backlot’ as they constructed a blue screen studio in a fen barn from which to shoot their production. 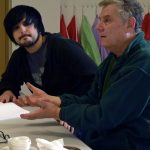 Chris Clark with the late James Aubrey at the Sleaford Hub auditions, February 2010. 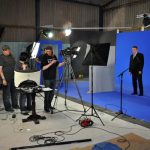 First day of filming in the newly created Billywood Studio, May 22nd 2010. 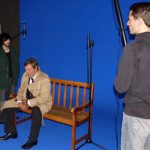 First day in the studio for lead actor Ian Mude as co-director Richard Dutton stands by with the boom.

The Shadows script and the initial showpiece ‘pilot’ video (shot in 2009) attracted the attention of a number of stars of British television. Joining the cast were Colin Baker (sixth incarnation of the Doctor), Sarah Jane Honeywell from CBeebies, and Jane Tucker and Malcolm Lord from Rainbow.

Originally heading the cast was legend of stage and screen James Aubrey of Lord of the Flies. Having overseen casting sessions, Jimmy sadly passed away weeks before filming began. With ‘Billywood Studio’ almost complete and a three month shooting schedule looming, it was Ian Mude who courageously stepped in at the last moment to allow the show to go on. 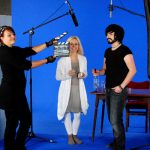 The first of the stars on set as Sarah Jane Honeywell films her scenes. 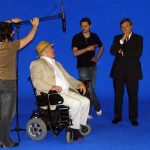 The Doctor has landed: Colin Baker at Billywood, June 2010. 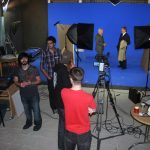 Hustle and bustle at Billywood as Malcolm Lord (Bungle from ‘Rainbow’) is present.

Supplementing the main cast was indie actor Paul Kelleher, along with Julie Neesam, Kay Roberts, and the ‘newcomer’ Martha Watson Allpress who was given the James Aubrey seal of approval at the open auditions.

Despite the tragedies and dramas, the filmmakers quietly persevered with their never-give-in attitude. Having completed principal filming in the summer of 2010, the next phase of the project began, the long road of post-production. Starting in October 2011, the team first put together a ‘blue edit’ before then building up the computer generated backdrops shot by shot. 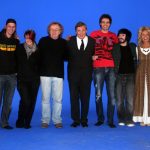 A curtain call with Jane Tucker (and Freddy Marks) on the last day of principal filming, August 27th 2010. 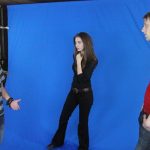 Sarah Barzyk-Aubrey films scenes with Oliver Fabian who had previously acted with her father in another film project. 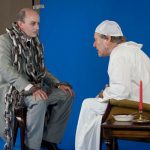 Barnaby Edwards and Ian Cullen on the mini blue screen set up in a Sleaford nightclub.

During 2011, a series of pick-up shoots was scheduled which saw even more exciting additions to the cast. Two more Doctor Who actors, dalek operator Barnaby Edwards from the new series, and Ian Cullen from the William Hartnell era, filmed some iconic Christmas scenes on the mini blue screen set up at a nightclub in Sleaford. A few weeks later came the most poignant addition to the cast as James Aubrey’s daughter Sarah Barzyk-Aubrey travelled over from Paris to film some cameo scenes in tribute to him.

That autumn also saw work begin on the film’s soundtrack as Spalding-based choir Cantemus were handed the task of performing the score. Recording took place that October in a rural Lincolnshire church. 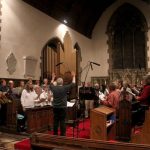 The Cantemus choir during soundtrack recording in Billingborough church. 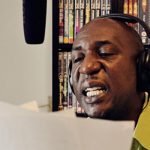 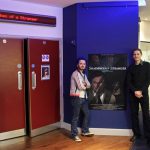 The long and intensive road of post production carried on throughout the whole of 2012. The final addition to the cast was also made with movie star Colin McFarlane (the Batman movies, voice of The Cube) recording his voice for one of the main characters.

The intensive workload carried on throughout 2013, although the camera was out once more in April to film even more extras to populate the scenes. By the end of the year, nearly all of the visual effects work was completed and final renders made.

2014 marked five years since pre-production began on Shadows of a Stranger, yet even more pick ups were shot in the spring. However, it was five years to the day, on July 31st, when the directors announced that the film was finally completed. On September 21st the film was unveiled at the Odeon Cinema in Lincoln to an invited audience of cast, crew, family, friends, and media.

Shadows of a Stranger was born, but the journey was not yet over… It would not be till 2017, 8 years on from the initial pilot video, that the film would finally be released to the world…

Shadows of a Stranger on